Skip to content
First page » Events / News » September Newsletter 2018
Solidarity is something that is lived among people ...
Of course, we need planning to move forward,
but our work is a human thing.
Michel Roy

Month particularly dense with contents and commemorations: a call to become increasingly active

The latest FAO report says: "The hunger in the world continues to rise for the third year in a row, affecting adults, women and children. In 2017, there are 821 million undernourished people, one in nine, 6 million more than the 2016, while the little ones between 2 and 5 years with delays in growth are close to 151 millions, 22%. "

The promotion of the rights of girls and girls, the eradication of hunger in the world are part of the Solidarmondo mission.

In all the houses of the Sisters of Providence the 5 October celebrates the feast of the founder St. Louis
Scrosoppi
Luigi Scrosoppi born the 4 August 1804 in Udine, city of Friuli, in the north of Italy. It grows in a family environment rich in faith and Christian charity. At the age of twelve he began the priesthood path, attending the diocesan seminary of Udine and in 1827 he was ordained priest. is dedicated, with other priests and a group of young teachers, to the reception and education of the "Derelict", the sunniest and most abandoned girls in and around Udine. For them he makes available his goods, his energies, his affection; he does not spare anything of himself and, when the needs are most urgent, he goes to ask for alms: he has faith in the help of the people and above all he trusts in the Lord.
His life is in fact a palpable manifestation of greatness trust in Providence divine.
So he writes, about the work of charity in which he is involved: "The Providence of God, which disposes souls and bends hearts to favor his works, was the only source of the existence of this Institute ... that loving Providence, which does not leave confounds those who trust in her".
On Thursday night April 3 1884, his is happening definitive meeting with Jesus. All of Udine and the people of neighboring countries come to see him one last time and ask for protection from heaven. It was canonized by John Paul II the 10 June 2001.
In the Roman Martyrology the memory is the 3 April. The diocese of Udine and the Congregation founded by him celebrate it 5 OctoberIn Orzano this festival is celebrated on Saturday 06 October. On that date the "Pia Società San Luigi Scrosoppi" will confer "The San Luigi Prize" to the CELUS association that operates in the Scampia district of Naples 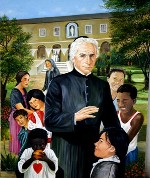 PROJECT OF THE MONTH OF OCTOBER

In the month of September we presented the project on the website, on the main page "Providence School" in Brazil. At the same time facebook Solidarmondo he illustrated the project. The likes in facebook have increased and this has pleased us so our realities are more and more known.

In October we will turn our gaze to India, focusing in particular on Barasat.
We invite you to visit facebook Solidarmondo to learn more.

On September 29 the National Council of Solidarmondo Onlus met for a verification of the projects carried out last year, with the contribution of five per thousand, and for an analysis of the expenses incurred. During the meeting, a provisional analysis was also carried out for the next year, assessing the future initiatives to be undertaken and the situation of the various member groups. The calendar of upcoming meetings has also been set.

Sunday 7 October 2017 from 15.00 to 17.00 will host the annual meeting of the animators of the missionary support groups "Amici Padre Luigi".
The meeting will take place at the house of the Sisters of Providence of ORZANO according to this program:

This year's meeting will be built with reference to the many poverties of the world and reflecting on the projects that the congregation, with the support of us lay people, is carrying out in the poorest countries.

The day 27 October in Orzano the "Indian Dinner" will take place, preceded by the testimony of the volunteers who went to various parts of the world.

SATURDAY OF THE USEFUL
With the material of various kinds received in the last year from individuals and shops, in closing or renovation, renovation or storage, and giving life to objects otherwise no longer usable, new but with damaged or missing packaging, sometimes damaged and not salable they have decided to realize this beautiful initiative to support the project "THE DOOR TO LIFE, whose construction started in these days.
The collected material (clothing, for adults and children, home accessories and a bit of everything) will be made available to those interested in exchange for a small offer, Saturday October 13 toOratory of Arco, in via Pomerio 15, from 10.00 to 18.00, continuous time.

The donations collected will be allocated to the above project.

Those who wish to do so can contribute to the project also by taking home: pillowcases, new or in good condition, light bulbs, soap or soap bars; we will send these things directly to Vogan as soon as the structure is ready.
.

at the Parishes Immaculate e Holy Family from Suzzara (MN)

The proceeds from the event will be entirely donated to the "Give Life to Life" project in Kouvè (Togo) at the San Luigi Scrosoppi Health Center of the Sisters of Providence.
The "Giving Life to Life" project aims to break the mother - to - child transmission chain of AIDS by ensuring mother - child care, so that these are born healthy. It carries out nutritional support activities, health education, prevention courses in schools and villages, accompaniment of children born HIV positive.