"The Christian is called to commit himself concretely to earthly realities, but to enlighten them with the light that comes from God. Priority entrustment to God and hope in him do not lead to an escape from reality, but rather to make God it belongs. This is why the believer looks to the future reality, that of God, to live life on earth in fullness, and respond courageously to his challenges. "

First world day of the poor 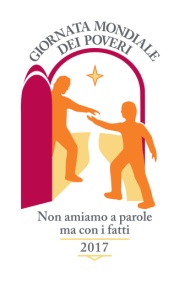 Papa Francesco established the World Day of the Poor. This day will be celebrated this year the November 19 2017 and has the following theme "We do not love in words but with facts".

The poor are people to meet, welcome and love. Poverty is not an abstract entity, but "has the face of women, men and children exploited for vile interests". Faced with these scenarios, the Pope asks not to remain inert and resigned, but to "respond with a new vision of life and society". This is a call to contribute effectively to the change of history by generating and promoting true development and seeking the "common good"

We at Solidarmondo, who have been trying to follow this path for some time now with our initiatives, welcome the establishment of this day with deep participation and we want to intensify our action.

Countries that require special attention during this period

Togo lives in a difficult political and institutional situation. In the 2005 after the death of Gnassingbé Eyadema, who had led the country for 38 years, his son Faure Gnassingbé succeeded, who from 12 years holds the fate of the country. Now the opposition parties are calling for a return to the Constitution of the 1992 which limited the number of presidential terms.

"Constitutional reforms are of particular importance, without which it is impossible to bring peace and social cohesion back to our country," the Togo Bishops write in the pastoral letter on the situation in the country, expressing deep concern about the repressions of demonstrations.
Togo is the only country to this day in West Africa that does not experience a political alternation and the Togolese people are in search of democracy, freedom.
Also Pope Francis Sunday 29 October invited to pray for peace in Togo

"Myanmar needs healing and reconciliation": Cardinal Charles Bo, Archbishop of Yangon, said in an interview to Fides, talking about the situation in the country in the imminence of the Pope's trip, which will be in the country from 27 to November 30.

We all know the crisis affecting the Rohingya ethnic population, in the Burmese state of Rakhine. The exodus to Bangladesh is of increasing proportions and the urgency of humanitarian assistance is getting stronger. This situation questions the governments of the nations of the area and the international community. Myanmar is a young nation, with 40% of the population under 30 years and its reconciliation is strongly supported.

With the press of the New 2017-2018 Manifesto, the Friends of Udine, an associative group adhering to the Solidarmondo Onlus network, officially begins the missionary campaign to support the Missions of the Sisters of Providence in Benin for the year 2017 / 2018.
There are various initiatives undertaken by the "FRIENDS OF UDINE" in this country of Africa in favor of the local populations and that are well summarized in the images of the manifesto of the New campaign under reproduction.

A heartfelt thanks to the Friends of Udine and to all those who wish to participate in their initiatives, giving joyfully. 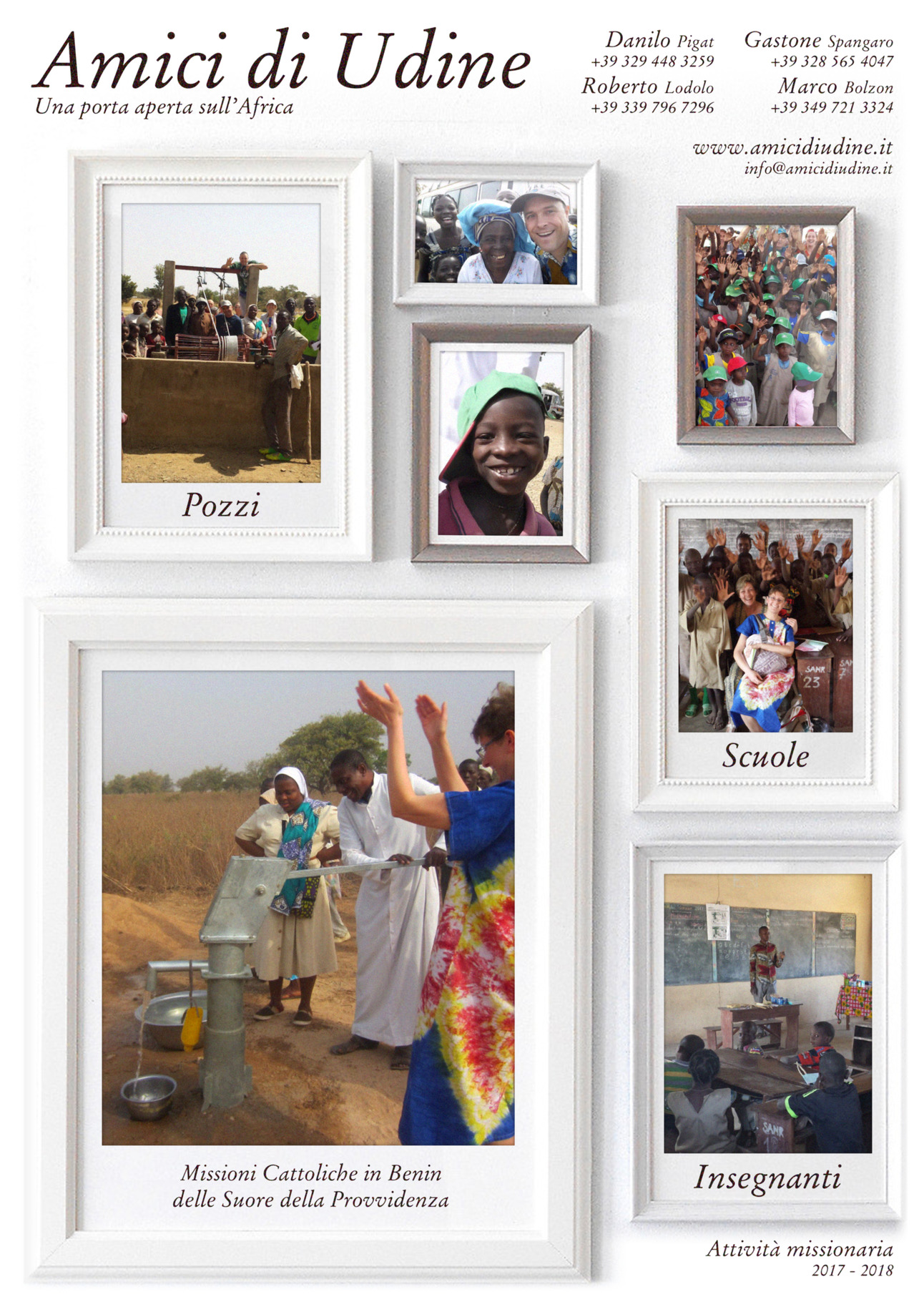 It is scheduled for Saturday 18 November at 20,00 at the Grand Hotel Liberty the solidarity dinner organized by Solidarmondo3ntino. The evening will be enlivened by live music that will cheer the guests while tasting the dishes on the menu.

It is advisable to intervene with theme clothing. 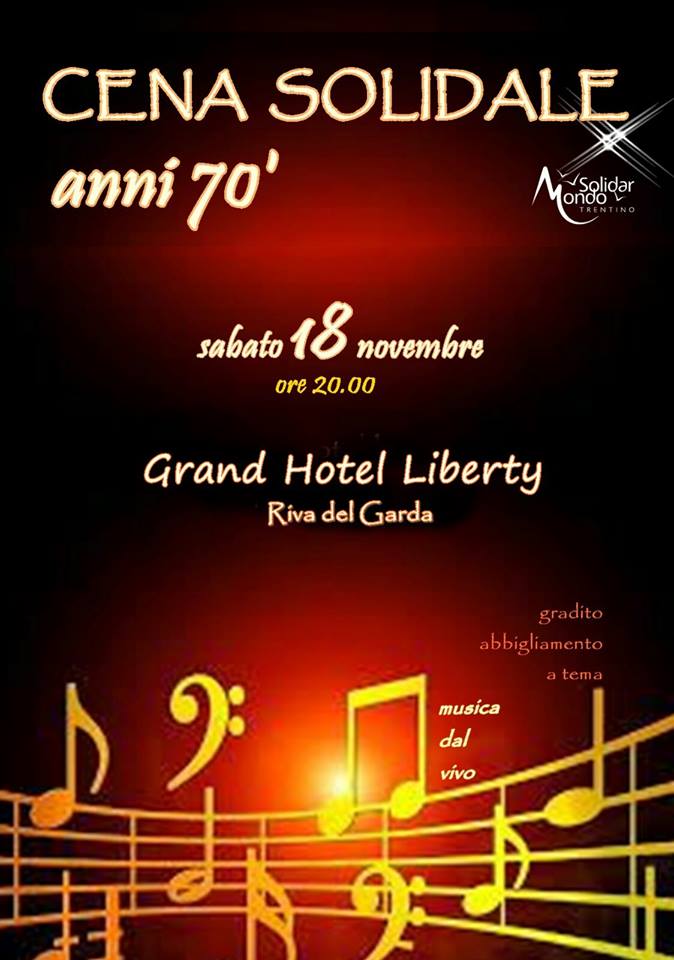 In support of the initiative "LA SPESA SOSPESA" launched by the Shalom association in order to provide support to families in need will be held Friday 24 November a solidarity dinner at Casa Rossa 1888 in via Mortelle 60 in Torre del Greco.

The La Spesa Sospesa initiative was born by transferring to the food sector the typically Neapolitan gesture of leaving a paid coffee at the bar for those who, due to poverty reasons, can not afford to enjoy an espresso at the bar.

The volunteers of the Shalom Association have taken up and modified this idea, giving way to a sort of social urban solidarity experiment in the territory of Torre del Greco, in order to implement a self-support program aimed at all citizens.

For those wishing to know more in detail the purpose of the initiative, you can visit the association's website at: https://www.associazioneshalom.org/spesa.htm 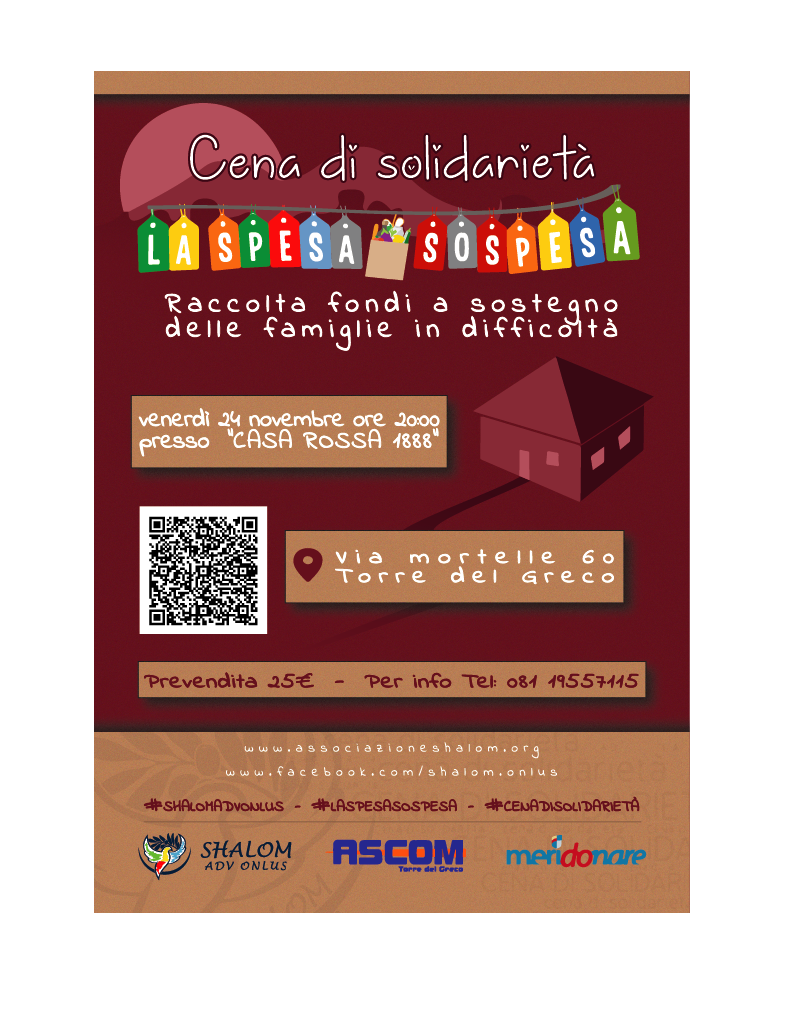