During these past few months, many parishes have taken steps to promote solidarity initiatives towards our missions with catechism children in preparation for first communion or confirmation. From the news we want to thank everyone for this, which in addition to concrete help to the various missions, is also an important way of education to solidarity and fraternity towards the poorest.

On Sunday 26 of May, at the sanctuary of the Madonna Missionaria in Tricesimo, the tenth edition of the motobenedizione took place at 12.15 after the celebration of Holy Mass.
Later, everyone gathered in the Piazza di Tricesimo where a lunch was prepared, based on pasta and a charity fishing. Here there were also spaces for stalls and the "Crazy Uncle" band that cheered the day. All proceeds were donated to the Togo missions.
Yamaha offered 5000 euros for the construction of a well. This initiative is documented on its website on the following page:
https://www.yamaha-motor.eu/it/it/experience/speciali/yamaha-don-michele-africa/?fbclid=IwAR2GJpUikNSyS3_gO8kTldxF5KcjzthVGxEVgxL5ks1jECWLAyM4l_JVtYI

Saturday 1 June in Rovereto in the squares of the center SOLID PLAY at the flea market “Solidarmondo 3tino” was present with a colorful game and book stand. It was a way to give new life to used but well-kept things, in exchange for small offers ...

All in favor of the project "THE DOOR TOWARDS LIFE"

On Sunday 2 June there was the annual meeting of the animators of the "Cuore Amico" group in Torre Del Greco (NA). For the animation and the testimonies the films made in 2018 by Sister Micheline and the young volunteer David were used.

Here is a very short film of the event:

As part of the country festivals "Fieste dai Borcs" the Fons group will participate in the cultural evening planned for 10 June. The theme will be: "The condition of girls and women in the world" and three associations will present their vision. "Fons" will be one of these associations.

The 15 June "Solidarmondo Udine" organized the now traditional barbecue in the early summer. It is a particular moment in the budget of the activities, but above all created to establish new relationships and consolidate the existing ones. 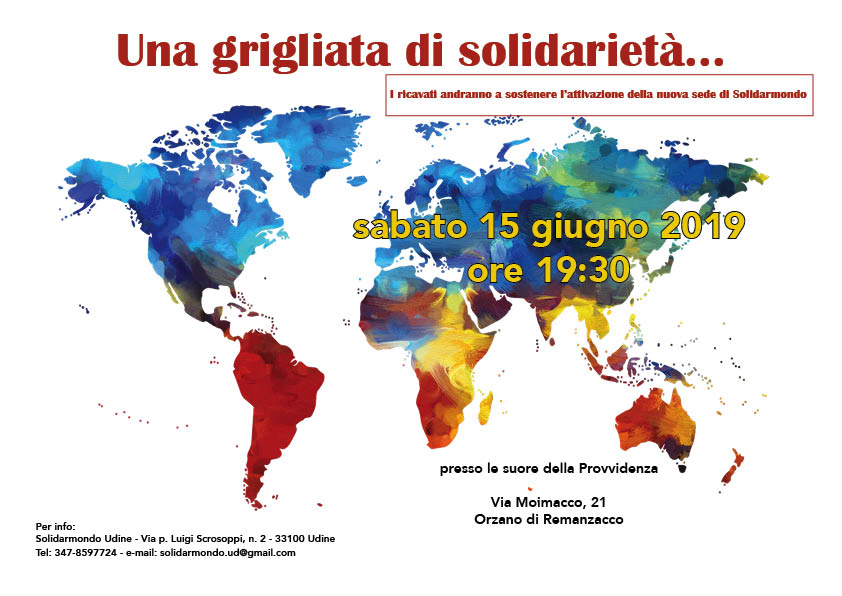 We recommend the Festival "ON THE NUDE SKIN", Theater Festival on the sites of the Great War (3 ^ edition) from the 25 May to the 16 June of the Molino Rosenkranz Cultural Association.

DO NOT MISS IT Theatrical performance "INVASIONS" ... which also brings with it some of our activities and experiences !!! 😉

In fact: "The plot of the show has been enriched with meaning also through the encounter with current life stories thanks to the collaboration with the" Il Noce "Association of Casarsa della Delizia and the Coop. Soc. "Il colore del grano" which runs the Mamma - Bambino house. A guided tour was carried out by the team of the House that allowed the actors to listen and share the testimonies of some women, often victims of violence, who were hosted at the facility with their children. "

Corima the day 21 June organizes a solidarity dinner for the girls of Barasat in India. This event also stems from the fact that our advisor Francesca had the opportunity to visit that mission and realized the need to support the professional studies of older girls. 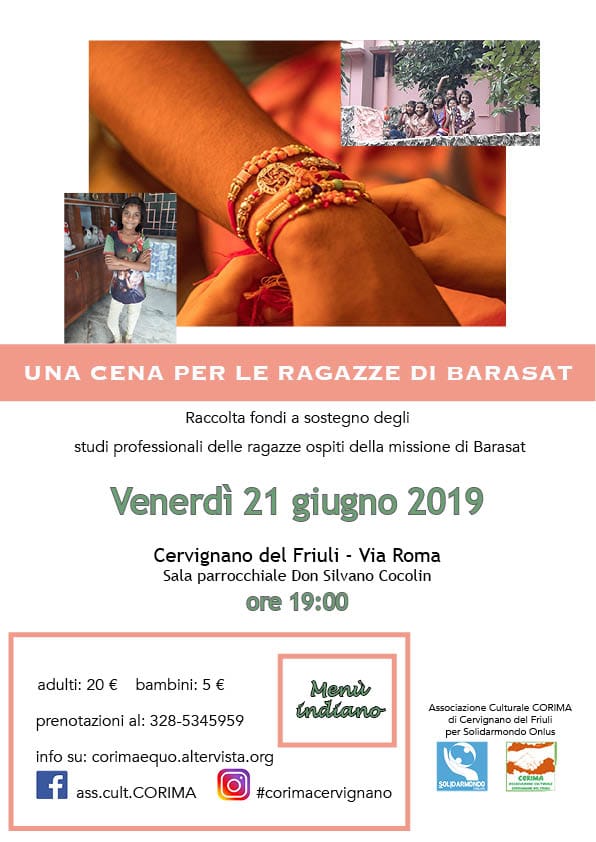 FIVE FOR A THOUSAND

It is time for tax returns and we all have the opportunity to choose to donate five per thousand to the Irpef to support the projects we have at heart.

Choose to donate your five per thousand to the projects that Solidarmondo-Onlus carries out in the world in collaboration with the Sisters of Providence in favor of the little ones.

It will be enough to affix your signature indicating the tax code of Solidarmondo in the appropriate box of the template attached to the declaration (Cud-mod.730-) and you can give a smile to those in need. 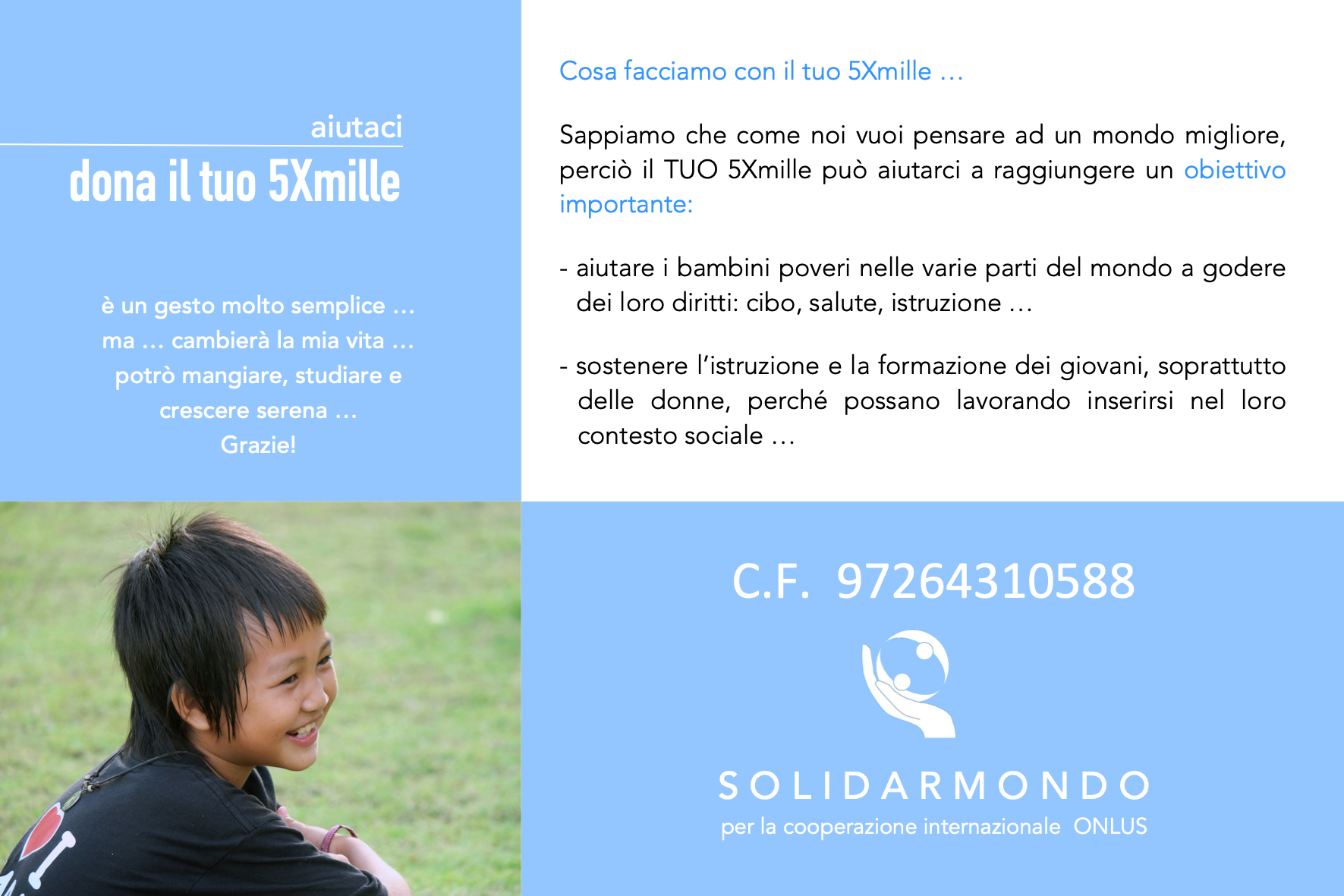