"Look for the Lord in a crib, look for him where no one looks for him, in the poor, in the simple, in the little one. Do not look for it in appearance. Look for it in unusual things that surprise you "

CHRISTMAS 2017 - THE GREETING OF THE SISTERS OF PROVIDENCE

The words spoken by Pope Francis when he was still a cardinal have a particular meaning for Solidarmondo whose purpose is solidarity and the promotion of human dignity.

Christmas in this world of ours means many things, from the most intimate and sacred to those profane. But the crib is the true sign of Christmas: that Bimbo placed on straw is the real protagonist. His is an irreplaceable role. It is a provocation to life. And Solidarmondo works with the Sisters of Providence to promote life that is for all a great gift, but immensely fragile.

In this period, each of you received the greeting, the greeting and the news from the mission he supports. This is a very beautiful thing because it is the voice of the sisters who live among and with the poor that you help and who are grateful for your constant and generous help.

The realities in which they live become closer to us in their daily life, made up of donation, work and sacrifice, joys and sufferings.

At the end of this year I want to briefly mention here some beautiful and other painful realities of our missions.

The birth of the Child Jesus in the Grotto of Bethlehem brings to the center of our life and our existence the dignity of the human person, the search for good, brotherhood, give us all new energy and enthusiasm in continuing our commitment to solidarity for a better world.

We wish everyone a peaceful Christmas, marked by the values ​​of peace, solidarity and the family.

SOLIDARMONDO - LETTER OF THE PRESIDENT

I take advantage of the Christmas and New Year's wishes to briefly introduce you to the results achieved in the 2017 and to share with you the strategic and programmatic lines that will characterize the future of the association and the objectives to aim for next year.
From the partial data at the end of November, related to distance support and project support, there was an increase of about 13% compared to the same month of the 2016. This positive result takes on particular importance if we consider the national socio-economic context in which Solidarmondo operates.
In addition to support, there has also been a slight increase in the annual share of 5 x 1000. As in 2016, therefore, we could cover all the expenses of the association and finance two small projects that urgently needed support:

I confirm the good progress in the various management of the association, as already highlighted in the previous year. In this regard, however, I would like to highlight two very significant aspects for me:

A policy that we have identified in the 2017 and which we hope to develop in the 2018, is to activate our association in the solidarity processes managed on the Internet.
Our current supporters are mostly elderly people whom we meet in parishes, social dinners, cultural events and which in turn involve friends and relatives. On the other hand, new generations are increasingly difficult to reach, meet and engage.
This phenomenon is generalized and the great associations, both national and international, have opened new ways to communicate, meet and involve young people. In addition to advertising on radio and television media, for us now out of reach, they use the various social networks that use the Internet.
The development of e-commerce, such as Amazon, has pushed the new generations to use the internet for the purchase of goods and services, paying them with a simple "click" directly on the sites on the net. The large non-profit associations therefore use these efficient methods to support their projects.
We at Solidarmondo ONLUS in 2018 want to network with these methods, to offer the possibility not only to promote our projects, but also to support them with a "click" on the pages of our site.
In this regard some of us have made a course for using facebook, but we have other courses planned to learn how to use all the most popular social networks. We are then in agreement with Banca Prossima to update our site, making possible the support with Credit cards e PayPal. We have the confidence or hope that in the medium to long term this will be the way to reach future generations. We have the hope then that thanks to this we can also increase the revenue of 5 x 1000.
The next Assembly of Members is scheduled for Saturday 22 and Sunday 23 April 2018 in Rome. It is an important assembly because at that time the board of directors of the association expires and the delegates to the different offices must be elected, including that of the president. As far as I am concerned, I am available for re-nomination even if I would be really happy to find, among the various associated groups, a younger motivated person able to face the challenges we have planned.
I owe my due thanks to the Congregation of the Sisters of Providence for the active presence of some sisters, and also for the availability of all to support and support us. A special thanks to the new General Council that I was able to meet to share the results we achieved, but also the objections and commitments, receiving appreciation, encouragement and closeness.
A big thank you goes to each of the 23 groups / associations currently part of Solidarmondo and a special thanks to their representatives who have provided a competent and disinterested service on the board of directors.
However, I think it is important to stress that all the energies we put into, the commitments that we carry forward with fidelity, passion and sacrifice are the fruit of the ideals that unite us: the realization of a more just, fairer and therefore happier world. All this is not a dream; the thousands of "graces" and "smiles" that come to us from the many brothers we "meet" in the poor countries of the world, are the most concrete evidence.
Aware that much still we can do to increase our association and therefore promote it "solidarity spirit", I sincerely wish you all a Holy Christmas and a happy New Year.

This year Il Mio Dono, the solidarity initiative of Unicredit in support of Non Profit, is back again this year.
The Il Piccolo Principe cooperative supports the mother-child home of the Il Noce association.

What is the initiative?

UniCredit provides a total amount of € 200.000 to be distributed, as a donation, among the Non-Profit Organizations participating in the website www.ilMioDono.it.

From Friday 1 December 2017 to Monday 22 January 2018, each of us can vote - in a completely free way - The Little Prince through e-mail, Facebook, Google+ and Twitter, following this procedure:

- access the site www.ilmiodono.it and research "Il Piccolo Principe" through "Search for Initiative" or "Search by Organization"

- click on the "vote this organization" button and choose the mode you prefer (email or social network).

EXTENDED as indicated in the poster below the opening of the Occupation Center of the Little Prince of Casarsa della Delizia for the sale aimed at raising funds for the projects of the IL NOCE association and the IL PICCOLO PRINCIPE Cooperative. 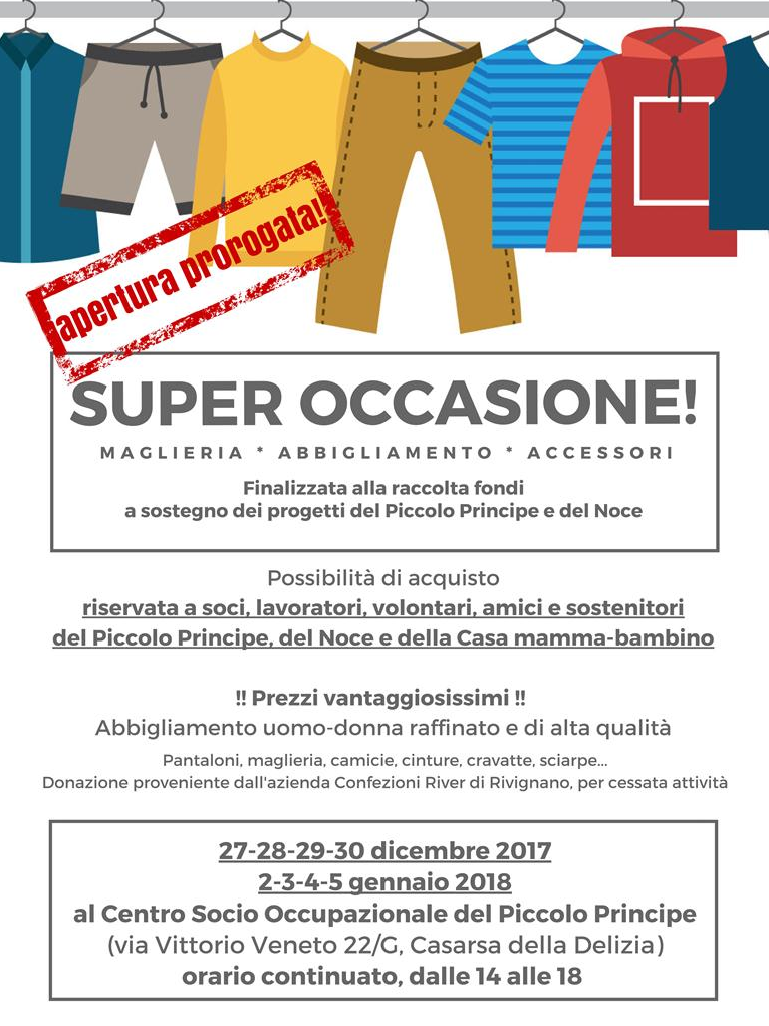